How Long Does Manchego Cheese Last?

If you enjoy cheese, there’s a type of sheep cheese you will love. It’s called Manchego cheese, a semi-hard cheese with an ivory color and small voids within. It has a distinct herringbone rind that is not edible and pairs well with wines, vegetables, and hams.

What is Manchego Cheese?

Manchego cheese is a type of semi-hard cheese made with sheep milk. This milk comes from the Manchega sheep in the La Mancha wilderness of Spain. Manchego cheese has a texture quite unlike any other in that it forms small voids in the cheese that make it granular as it ages.

They are reminiscent of the voids in Swiss cheese but are not round like the ones formed by carbon dioxide bubbles in Swiss cheese. Instead, they look like long cracks or crevasses. It has a distinctive yet relatively inoffensive flavor that lingers on the palate longer than most cheeses.

However, this flavor is quite sweet and maybe enjoyable on its own, paired with wine or other snacks.

How Long Does Manchego Cheese Last? 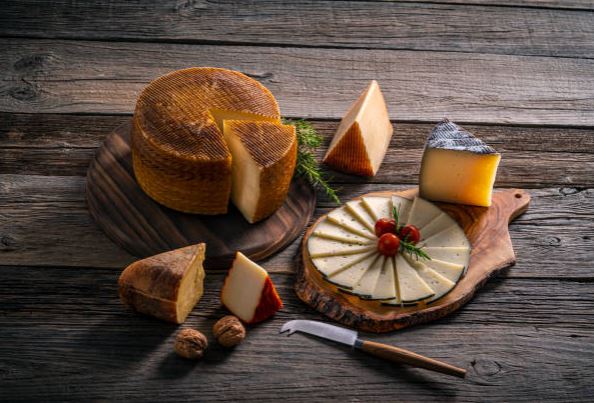 Manchego cheese lasts for different periods depending on a few things. Mostly, it depends on whether it’s in a room temperature environment, like on a shelf or in the fridge, as well as whether or not it has been opened. You may also wonder, how long do Hello Fresh meals last? Well, we’ve got a complete guide on it! So, how long does Manchego cheese last?

If you’ve yet to break the rind of the cheese, a Manchego cheese can last up to four weeks unrefrigerated. However, if it’s exposed, it’s not recommended to eat it if it’s been sitting out for more than four to eight hours.

If refrigerated, Manchego cheese can last four to six months. It’s essential to make it last this long that you contain the cheese in a humidity-controlled environment like a humidor or crisper drawer. If there is no moisture-controlled compartment in your fridge, store the cheese on one of the bottom shelves.

Can You Freeze Manchego Cheese?

It is possible to freeze Manchego cheese. However, it may not be worth the extra effort as this hard, dry cheese typically lasts for months in the refrigerator. If you do freeze it, you can thaw it in the fridge and eat it. It’ll be somewhat grainy when you defrost it, but it can last for a very long time, at least six months.

How To Store Manchego Cheese?

If you’re a fan of cheese, you might think the best way to store a piece of cheese at home is to immediately wrap it in plastic wrap and stick it in the fridge. While it may be a good idea to put cheese in the fridge, avoiding using plastic wrap to store high-quality cheeses is strongly recommended. Cheese needs humidity to retain the proper level of moisture. Without this, the cheese will dry out, and it can even develop an ammonia-like smell to it. You want to avoid this at all costs.

A great way to store cheese at home is to buy a humidity-controlled container with a humidor. This method of storage will allow the cheese access to some air and control the humidity while still isolating it from mold spores and other things that might spoil the cheese faster.

Most Manchego cheeses will be totally gluten-free. This is because they are usually created with 100% natural, raw sheep’s milk and do not include fillers or preservatives.

What is a Substitute for Manchego Cheese?

Some cheeses are known as Manchego-like cheeses that are similar to Manchego. While not able to be marketed as Manchego cheeses, they’d make suitable substitutes. However, you can also use a multitude of more common mild cheeses like Asiago, Mozzarella, Parmesan, or Monterey Jack in recipes calling for Manchego cheese. They will be mild enough not to overpower most dishes as they are similarly mild to Manchego.

The Fresco variety is only aged for about two weeks and is rarely available outside of Spain.

Semi Curado is a bit firmer as it is aged from three weeks to about three months. It becomes tangier and fruitier at this time.

Curado cheese is even firmer, having aged for about three to six months. The fruity flavors become more caramel-like, and it develops a nutty flavor.

Finally, Manchego Viejo is firm cheese aged for about one to two years. This is a sharp, crumbly cheese with a rich pepper flavor. If you’re looking for some great knives to cut your firm block of Manchego, consider some of the best high-end kitchen knife sets!

How is Manchego Made?

Cheesemakers pour large amounts of cool sheep’s milk into heated vats below. Then, culture and rennet are added to the milk and stirred. These ingredients and the heat coagulate the milk, making it into a firm curd.

This curd is cut and separated where it’s drained to get rid of extra whey. Then, they can put it into the molds and begin to cure and age the cheese. Depending on how long it’s aged, it would be considered a Fresco, Semi Curado, Curado, or Viejo.

What To Serve With Manchego Cheese

As a fantastic table cheese, it can be served with tomatoes, olives, dates, figs, cranberries, bread, or ham. These all make fantastic combinations with Manchego, but the best combinations are with wines. It pairs best with a robust red wine or a dry sherry.

Where Can You Buy Manchego Cheese

You can find Manchego cheese in a lot of stores you’re probably familiar with, like Sam’s Club, Target, Walmart, and ALDI. You can also get it online from Amazon or smaller online retailers like Yummy Bazaar!

Manchego cheese could be considered healthy as far as cheeses are concerned. For one, it’s often gluten-free, which allows those suffering from Celiac Disease to eat it. It also lacks carbohydrates and sugars, including lactose, meaning that lactose-intolerant people can eat it too.

An average serving of cheese will have about 10 grams of fat and 7 grams of protein, so it’s great for high-fat and protein diets. It’s recommended that you look at the package on your specific Manchego cheese as there is some variation in the nutritional content of these cheeses. It’s also delicious, and this will help you stay on track with your goals.